What Tender Possibilities: Two Meditations on the Oikos

In Contract and Contagion, Angela Mitropoulos establishes the possibility of a politics of the oikos that accounts for more complexity than the Arendtian conception of the private or Marxian theories about reproductive and productive labor. In her account, oikopolitics involves self-management of the masculinized political subject through the management of the household and a performed contractual insurance against uncertainty. I began to think of the form she suggested as the mega-oikos, the oikoplex, or the oikostructure: a world household that enables the hyper-contractualism necessary to post-Fordist capitalism. Without the household, there would be no contracting subjects.  However relations between these fraternal subjects, like everything else in a world of crowds and contagion in which a Lucretian dissolution of the known order of things always threaten, are uncertain because of the uncertainty of the household itself: the contract then is a method to make of contingency necessity, to valorize risk. My response, which is in two parts, first looks closely at the Oikonomikos and what it might tell us about contracts, care, and the gendered division of labor.  The second part will address what looking through the lens of oikopolitics could mean for possible futures.

1. “Supposing he never had a flute of his own.”

It is probably important to return to the household of approximately 2376 years ago. As far as we can tell, it looked like this:

In the front of the household were the women’s rooms—the gynaikonitis.  Behind these were the common areas and the living quarters for the men—the andronitis. It was there one could find the libraries.  The men’s area, along with the household, was also wherever was outside of the household—that is, the free man’s area was the oikos and the polis and was the world.  The oikos was always at least a double space, and doubly perceived, just as what is outside of it was always a singular territory on which slaves and women trespassed. The singular nature of the outside was enforced by violence or the threat of it. The free men’s home was the women’s factory; also—for women and slaves—their factory was a home on its knees. 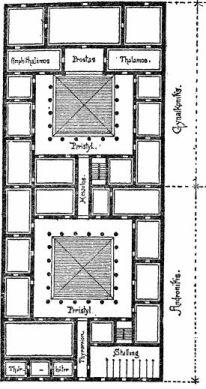 The Oikonomikos is a Socratic dialogue, and in it, Socrates, having little wealth, has no claim to a practical knowledge of managing it.  When Critoboulus asks him “A science of economy exists; and that being so, what hinders you from being its professor?” Socrates replies that what hinders him is what hinders a man from playing the flute when he has no flute and no one has ever let him borrow one. This does not, however, actually stop Socrates the fluteless flute-player[1] from then becoming a professor of economics.

In order to do this, Socrates offers an account of an interaction with the “good and beautiful” Ischomachus, who offers an account of his own goodness and beauty as achieved, in part, through a successful lecture about household management to his wife. Ischomachus is lecturing his wife precisely because he himself cannot engage in household management.  As a man, he says, he would be punished by God for doing women’s work: this is why his wife must listen to his lecture, so she can do it, instead, as his proxy. In this, it appears that Ischomachus’ knowledge of household management is as speculative as that of the economy-less economics professor, Socrates.

We thus have a double level of flute-less flute-playing: Socrates, who must only speculate, lectures with the lecture of Ischomachus, who also must only speculate. Ischomachus’ wife, we are told, knows nothing, either, (she “had been most carefully brought up to see and hear as little as possible, and to ask the fewest questions”) but is “accustomed” to her husband’s hand. By this, Ischomachus makes clear, he means “tamed.”

It is either through this nested speculative lecture in speculative lecture or the careful listening of a tamed (and docile-y un-speculative) wife at the heart of the story, that economics—the dismal science— or in its guise a celebration of the gendered division of labor and male self-management, an even more dismal art—arrives.  Managing wealth is much the same as managing women: indeed, Ischomachus’ wife must manage the household and be the household at the same time.

Perhaps Ischomachus’ wife[2] could provide an economic analysis with some degree of expertise despite Ischomachus’ certainty that she had been disciplined out of all curiosity and perception. She is not, however, allowed to do much in this dialogue but agree and ask her husband-flattering questions. The very quality that enables her to run a household (being a woman) is that which prohibits her from speaking about it or outside of it.

Mitropoulos tells us that historically “Xenophon’s writings accrue importance at particular moments precisely because they blur (if not quite erase) the Aristotelian distinction between the egalitarian logic of politics and the hierarchical one of the oikos.” For me, Xenophon’s dialogue as a dialogue also takes on a particularly interesting character of Mitropoulos’ thinking about contracts. The contract, like the philosophical dialogue, is a “manly masquerade”—a performative exchange among male subjects.  And the philosophical dialogue, like the contract, seeks to tame uncertainty, “what amounts to an often-violent containment or framing of the speculative.”  As Mitropoulos notes, “contracts are part of the making of what they say” and “the contract is an artifice, involving fiction and not always fact. In this, the performativity of contract assumes the character of a violent aesthetic.”  The uncertainty to be tamed by the art[ifice] of this contract/and/or/dialogue of the Oikonomikos is women (or one woman, Ischomachus’ wife), and along with her, the household. The highly speculative Oikonomikos is, then, is a philosophical dialogue in the shape of a contract or contract in the shape of a dialogue, and in its framing of “economics” as founded in the gendered division of labor, it makes what it says.

God made of women an indoor body, Ischomachus tells his wife, and made of men an outdoor one.  And this scheme—what becomes, in future iterations, public and private, of production and reproduction, of waged work and unpaid servitude—is the order agreed upon in this dialogue to attend to the risk posed by those who make the oikos.  Like the queen-bee, Ischomachus tells his wife, she too, will have to stay inside.

Ischomachus’ wife can’t speak for herself in this dialogue just as she cannot negotiate and sign a contract. She is instead, as Ischomachus reminds her at the beginning of his instruction, introduced to the household the subject of a contract between her husband and her father[3]. What Ischomachus’ wife does engage in, according to Ischomachus’ description of what she must do in the household, is something a little like the contract, but also to the side of it. His wife provides care, which while having some elements of the contractual, can also be understood as paracontractual.

In this difference, the household (and all associated with it) in its relation to itself demonstrates a possible infrastructure for politics that lies beyond the contract.  If Ischomachus’ wife could speak she might tell us that though denied the power to contract, she has the more potentially destabilizing economic and political power to provide or deny care, that paracontractual relation on which the contract depends (I began to think here, if an analogy is useful, of the paracontractual relation or care like the “all the world” that is the stage; and those who perform contracts mere actors upon it.) Both Socrates and Ischomachus note, it is the wife (particularly one who is not properly tamed) who can bring disorder to the economy.  The dialogue suggests the household to be managed is a woman; the woman to be managed is a household— but also, the woman must be “managed” into managing, and in this is exposed the power she holds over reproduction and reproductive labor, and also that she, herself, is embodied risk.

According to Mitropoulos, our age of oikopolitics, ushered in by Machiavelli, for whom “what men and states must avoid at all costs is resembling women,” depends on this balance of equality (between masculinized political subjects) and hierarchy (over the household).  As life under capital depends on contractual relations—notably labor contracted between free people— these contractual relations (Marx’s “very Eden of the innate rights of man”) rest on “the foundational gift of naturalized servitude, which is to say, the surplus labor that is always unpaid.”  That is, it is the unwaged labor—what the queen bee does with her “indoor body”—that allows the contractual relation of wage labor—what is done with “outdoor bodies”—to exist.

Oikopolitics is, for Mitropoulos, “the nexus of race, gender, class, sexuality, and nation constituted through the premise of the properly productive household.” That is, it provides an analytic that “moves beyond the epistemological reliance on either identity…or the flattening of differences” but considers the hierarchal difference imposed by genealogy on certain types of bodies and people and the relation of this to all else. “A politics of the household,” writes Mitropoulos, “turns on that most materialist of propositions: we are how we live. What forms of attachment, interdependency, and indebtedness are being implemented, funded, obliged or simply and violently enforced; and what tender possibilities are foreclosed?”

[1] As Robin James points out in her talk Philosophical Attunements: Flutes & Women in Plato’s Symposium, in the ancient world, flutes have a relationship to uncertainty, training, and women. The flute can’t be tuned, only trained. As James quotes: “in the case of flute-playing, the harmonies are found not by measurement but by the hit and miss of training, and quite generally music tries to find the measure by observing vibrating strings. So there is a lot of imprecision mixed up in it and very little reliability” (Philebus 56a).   James further concludes: “Women and other non-philosophers, like flutes, have a disproportionate relationship between their speech and their visible bodily structure. Philosophers, on the other hand, have a proportionate relationship between their speech and their visible bodily structure.”  If Socrates, and Ischomachus, are flute-less flute players, this suggests their fundamental alienation from the women (and the household) and their attempt to manage its relations.

[2] Ischomachus’ wife’s name, though it is never mentioned by Xenophon, is Chrysilla. Later, according to ancient rumor, she seduced her son-in-law, drove out her daughter, and had a son by her son-in-law, perhaps appropriately enacting her revenge on the order of the household in which she was trained.

[3] For more on the marriage contract as foundational, see Carole Pateman’s The Sexual Contract.

You can continue reading Part Two of What Tender Possibilities here: https://digitallabor.commons.gc.cuny.edu/2014/03/06/part-ii-what-tender-possibilities-an-infra-oikos-an-under-oikos/

Need help with the Commons? Visit our
help page Send us a message
Skip to toolbar

Built with WordPress Protected by Akismet Powered by CUNY